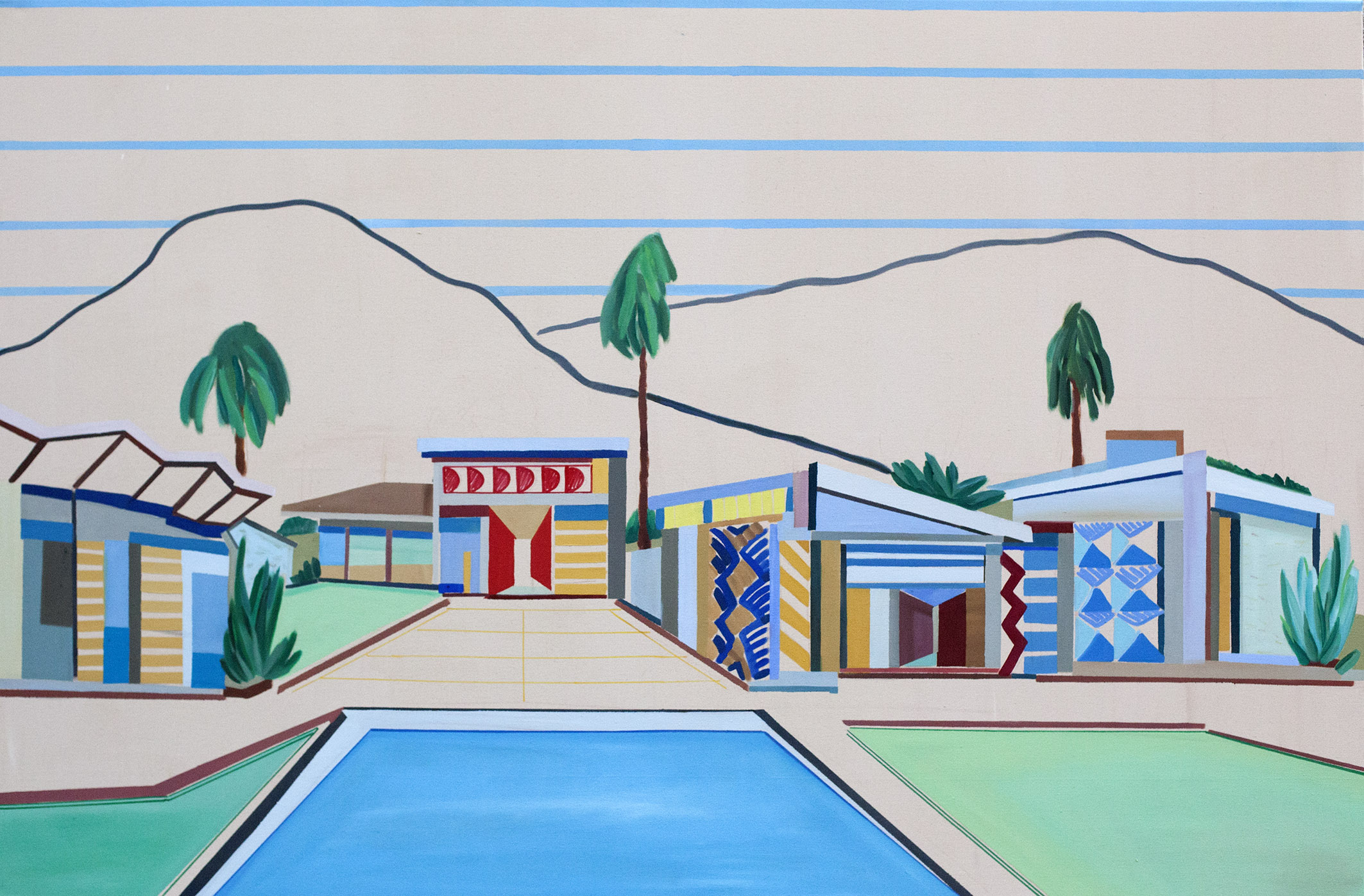 Mid-century modernism, developed in the US in the post-war years, finds its astonishing expression in many symbolic buildings and houses in Los Angeles. Its reflection of the International style and Bauhaus resulted in less formal, rather organic structures, open interior spaces and a more active integration of nature. In combination with the local vegetation and the landscape it produces particular images.

The departure point for my visual research lies in the tradition of the representation of architecture in the media of painting and architecture drawing. These are visual investigations of the way the artistic gaze changes the object and predetermines its perception. As Beatriz Colomina writes, “architecture is not simply a platform that accommodates the viewing subject. It is a viewing mechanism that produces the subject. It precedes and frames its occupant“ (Sexuality and Space, p. 83).

After projects about modern architecture and urbanism in Europe and the socialist countries, I shift my interest towards a part of the modernist movement that has its full expression not only in big, representative projects, but in individual, almost intimate, open projects, such as the mid-century houses in and around Los Angeles.

The cinematography of this architecture has long been a theme developed in Hollywood cinema. The house becomes an independent story character – very important to the film story in „The Night Holds Terror“ by Andrew Stone (1955), „L.A. Confidential“ by Curtis Hanson (1997) or „The Big Lebowski“ by Joel and Ethan Coen (1998) for example. All this cinematography is also present in the iconic paintings of David Hockney, which contribute to the creation of a myth around the architecture of the private home in Los Angeles. 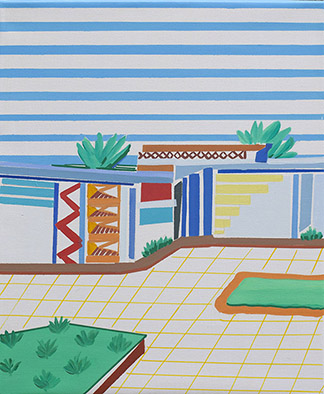 In my painting series I am not that interested in accurately depicting any particular house, but more in exploring the mythologization and dramatization of Californian architecture in the arts and the process of the desire to create „modern machines for quality living.“ I examine the individual approach and the ways of interpretation on a visual level. My interest lies in the architecture, its connection to organic forms, its patterns and colors, and its representation, historic and contemporary. The paintings feature reduced, almost geometrical objects, mixed with organic, expressive shapes.

In these pieces I work with flat colored panels and the geometry that characterizes this period. The way architecture is interpreted deliberately pursues some kind of „craft“ approach. This corresponds to the pathos of the 1950s and 1960s, when we can see the desire to create the perfect geometric environment for living in a time when the digital design technologies did not yet exist.

These architectural phenomena, as a product of the culture of the time, contrast with nature, which is represented as surrounding vegetation. Nevertheless, this „nature“ seeks harmony with this „culture“ – through the schematic (replica of the late modernism) depictions of palm trees or shrubs. 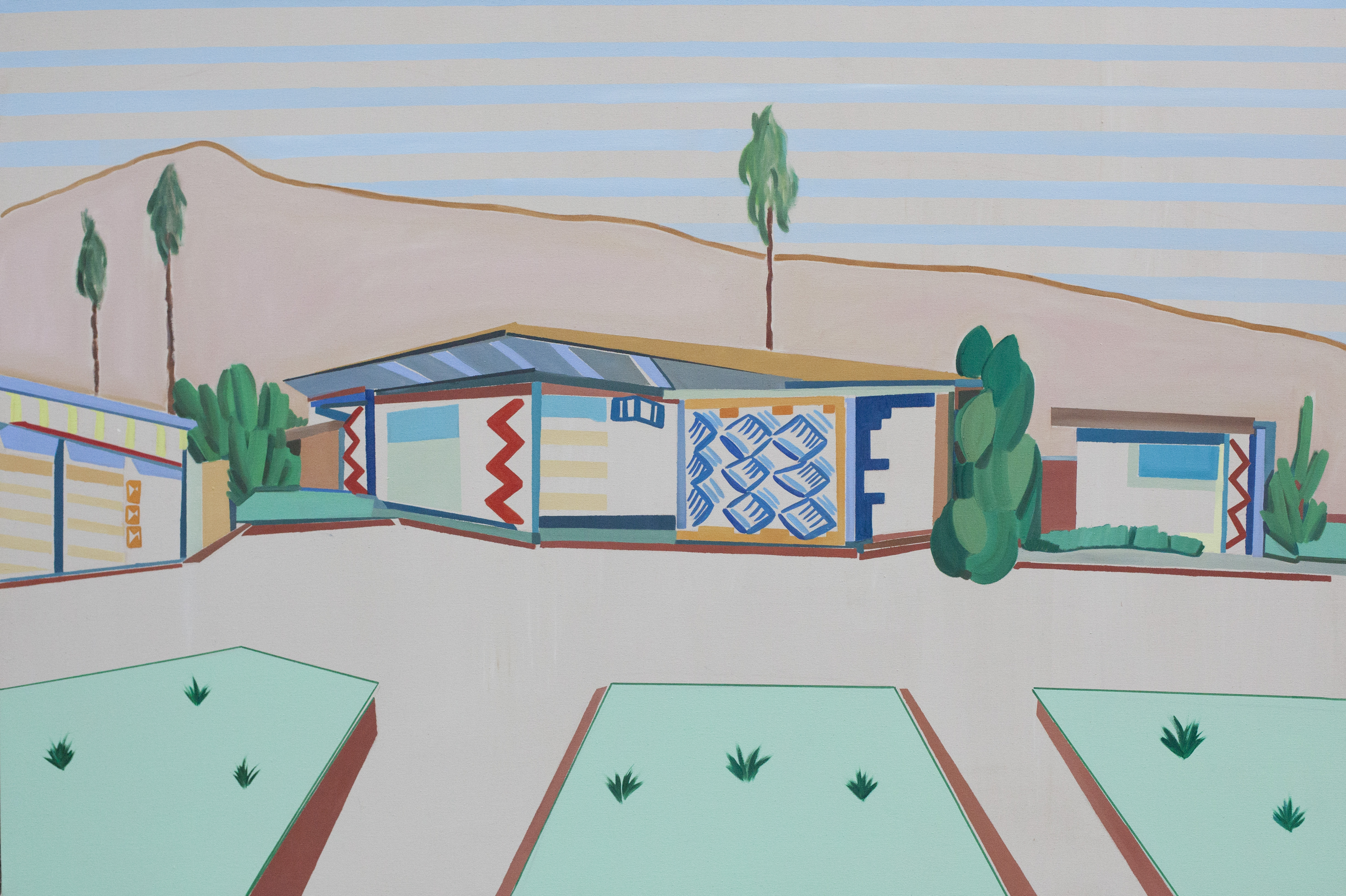